How badly was YOUR hospital hit before second wave of Covid peaked? Interactive tool shows how NHS cancer treatment was hindered, diagnostic scans delayed and waiting lists soared across the nation in December

Exactly how badly Covid ravaged the NHS during December was laid bare today by an interactive tool that tells you how your hospital fared before the second wave even peaked.

MailOnline’s analysis of the most up-to-date monthly NHS statistics has uncovered the huge blow dealt to cancer services and other routine treatments by the surge in infections, which saw trusts across the country warn they could be overwhelmed by surging admissions.

Cancer patients are meant to be seen for potentially life-saving treatment within 62 days of being diagnosed. But no hospital trust in England met the target in December, while just a third of patients were seen within the crucial time-frame at two trusts in London and Birmingham. And 65 per cent of hospitals saw fewer cancer patients than at the same time the year before.

Separate figures showed nearly 1.4million patients had waited longer than 18 weeks for vital scans and diagnostics tests in England in December. In comparison, the figure was 646,000 for the same month in 2019. Fewer than half all of patients in Bradford and Chester had been sent for scans within the four-month target.

Charities today said the stark figures painted a grim picture of the ‘devastating’ impact the pandemic has wrought on the healthcare sector.

Hospitals were forced to cancel tens of thousands of procedures to cope with the influx of Covid patients during the second wave, sparking fears of a timebomb of non-coronavirus illnesses such as cancer.

Pressure on NHS units has eased dramatically since the crisis peaked in January but there are still 10,000 infected patients on wards — above levels seen last May when the first shutdown was eased.

Health bosses have warned of a ‘hidden’ waiting list of six million patients who haven’t come forward for treatment could flood NHS later this year.

Head of the NHS Confederation Danny Mortimer said that official waiting list could swell to unprecedented levels that have not been seen in more than a decade.

Mr Mortimer added that patients should expect to wait months – and in some cases up to a year – to be treated after Chancellor Rishi Sunak’s Budget offered no new investment to meet previous guarantees on waiting times.

The NHS Confederation estimated that there was a 30 per cent drop in the number of patients being referred for treatment from 2019 to 2020.

It is thought that these 5.9 million ‘hidden’ patients still require treatment but do not appear in any NHS statistics.

But almost two thirds are expected to join waiting lists later this year – with figures expected to grow from 4.6 million in December 2020 to 8 million by October 2021.

Mr Mortimer warned that this would represent the worst levels for 10 or 15 years.

Every hospital trust in England failed to reach the NHS target of starting treatment for all cancer patient within two months of their diagnosis in December 2020, figures revealed.

It came amid spiralling Covid hospital admissions during the second wave, with doctors and nurses stretched to the limit at many trusts.

The worst performing hospitals out of 124 where data was provided tended to be in large cities, where more beds were occupied by patients suffering debilitating symptoms triggered by the virus.

North Middlesex Hospital NHS Trust, in London, was worst hit after only managing to start treating 34.7 per cent of cancer patients within the 62-day target (38 patients were waiting for treatment). This was less than half the 70.5 per cent seen at the same time the year before.

University Hospitals Birmingham NHS Trust was the second worst-hit at 38.9 per cent, compared to 54.9 per cent in 2019.

And Norfolk and Norwich University Hospitals saw 51.4 per cent of cancer patients within two months, compared to 67.3 per cent the year before.

Separate data shows each of these hospitals had more than 90 per cent of their beds full, on average, during the course of the month. At least 12 per cent of beds were occupied by Covid patients. In North Middlesex Hospital almost 30 per cent were used for coronavirus.

Read More:  Is Your Living Room the Future of Hospital Care?

The NHS also publishes figures on the number of suspected cancer patients seen within two weeks of an urgent referral from their GP.

Almost nine in ten of these individuals do not have cancer, but waiting longer could cause the disease to spread, becoming harder to treat.

University Hospitals Birmingham also saw the fewest patients that potentially had cancer within this time frame in December, after checking just 44.3 per cent out of 2,793 patients in the time-frame.

‘The NHS is working hard to protect cancer services,’ she told MailOnline. ‘But the impact of Covid on cancer patients has been devastating, with 41,000 fewer patients in the UK starting treatment compared to the year before.

‘The Government must urgently make sure the NHS gets the funding it needs to clear the substantial backlog of patients waiting for diagnostic tests and treatment.

‘It’s vital we get back, as soon as possible, to ensuring faster and earlier diagnosis of cancer when chances of survival are greatest.

‘This spring budget could be that moment to help give every person with cancer the timely diagnosis and treatment they deserve.’

Professor Clare Turnbull, a cancer expert at the Royal Marsden NHS Foundation Trust, told a meeting of the Royal Society of Medicine last month there could be a ‘sizeable number of deaths’ sparked by the delays. 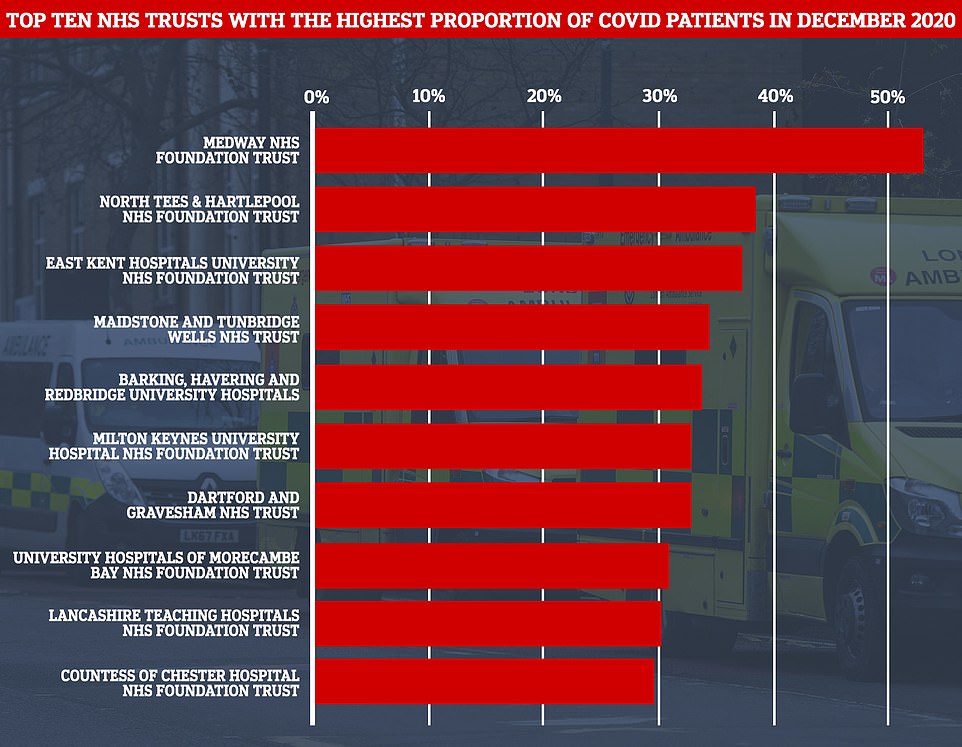 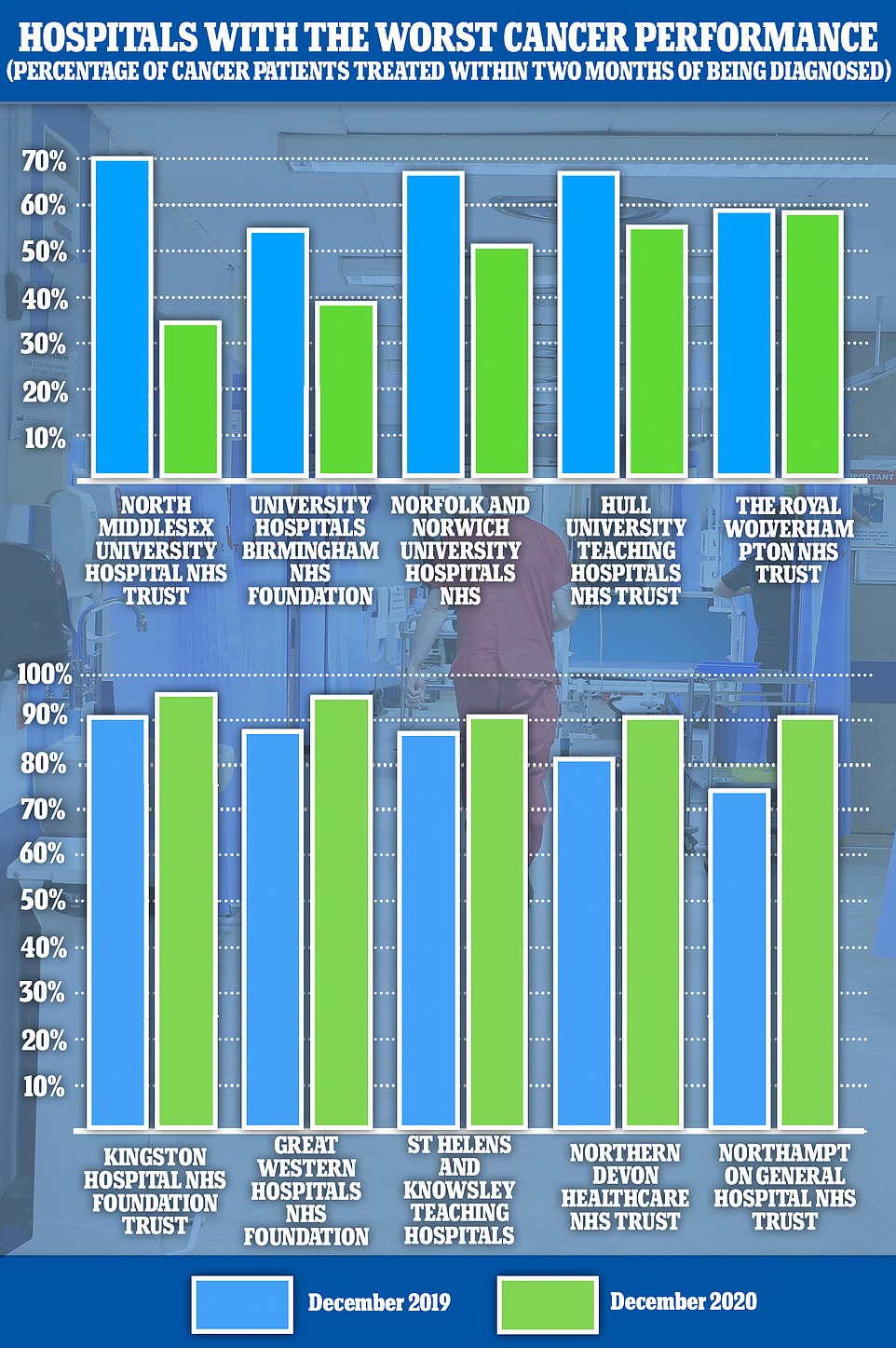 More than 1.45million patients waited longer than 18 weeks for routine treatment in December

This was more than double the number waiting longer than four months the year before, when there were 646,000 on the nationwide list.

Procedures people have to wait for tend to be routine non-emergency operations such as joint replacements or cataract surgery.

Data also showed no hospital hit the ‘milestone’ of seeing every patient referred for a diagnostic test within six weeks, risking some conditions becoming harder to treat because of the lengthy time they were left unchecked.

The worst-hit hospitals with the longest referral to treatment times were scattered across the country, highlighting the national impact of the virus.

In terms of the longest waiting times for diagnostics tests, University College London Hospitals still had 70.3 per cent of patients on lists after six weeks (of 4,074 patients).

As many as 174 NHS trusts in England provided referral to treatment waiting time data in December 2020, and 168 in December 2019. 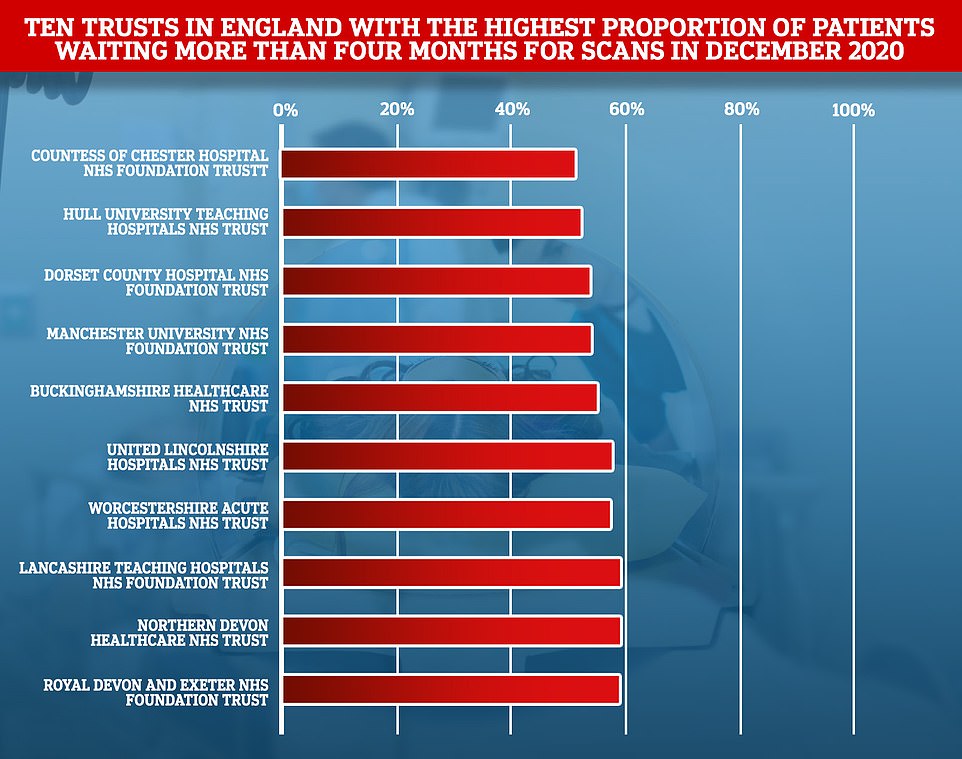 Almost every single bed was occupied at two hospitals in London over the entire month of December, official NHS figures revealed.

Whittington Health NHS trust, in Islington, and North Middlesex Hospitals, in Enfield, were both almost completely full throughout the month.

Whittington had 183 out of 185 beds occupied throughout the month, on average. While North Middlesex saw 394 out of 400 beds filled.

More than 22 per cent of beds at both trusts were taken up by patients suffering from Covid, the NHS figures also revealed.

Overall, the third highest levels of occupancy were in Buckinghamshire Healthcare Hospitals at 98 per cent (320 of 329).

Medway Hospitals, in Kent, had the highest proportion of Covid patients in December, with 57 per cent of all beds occupied by the infected, on average (195 out of 371 patients).

It was the only hospital in the country to have more than half of its bed capacity filled by Covid patients, which is thought to be linked to an explosion of cases in the county triggered by the more infectious Kent variant.

Hospitals with fewer than 150 beds were excluded from the MailOnline analysis. 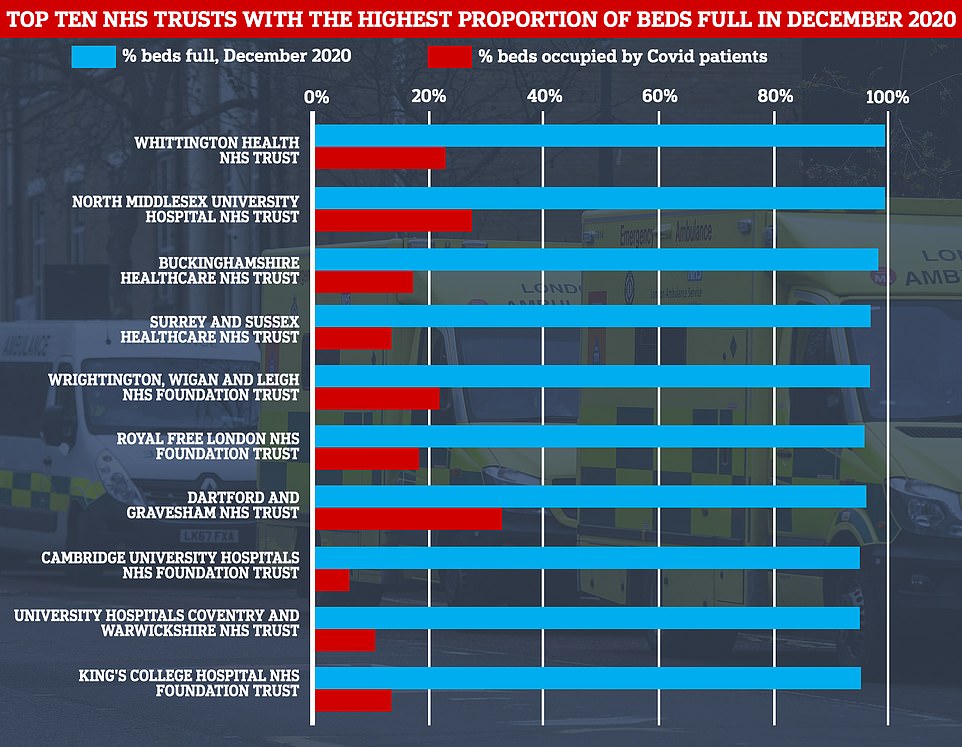